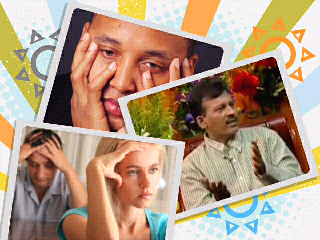 Life is in the middle way- logic is not!

To opine openly one shall not totally 100% support or negate any concept in this world!

But, whenever two people start arguing they totally defend or offend a subject vehemently in either extremity. I used to get surprise on seeing many debates and incessant arguments going on in media between learned people on many topics in the same way.

For instance take down the recent FDI foreign direct investment.

One side is supporting FDI and the other side is denying it.

Take an idea that how one can debate on supporting/denying a substance 'sugar' or 'salt' that is very much needed or say not at all needed. Many things like that whether it is animate or inanimate conceptual or imaginary are going to be in this world forever.

And can any one point out a substance/concept which is altogether that is 100% wasteful one or one which is never needed at all?

No. No one dare to say that.

So the arguments/debates I pray should not be "for" or "against" any such meaningless topics to kill our time.

Rather the debates should be focused on:

Without addressing these basic 5 questions in details any debate/argument is futile and would be a logical stupidity in nature.

Let me come to the debate on FDI now. It is not a new concept to this world. It has already descended on many countries and is in practice. So the debate can/should be on:

1. How much percentage of foreign direct investment India can allow in retail business?
(here in my opinion FDI invest in retail should not be more than 25%. That is 75% our Indian contribution and 25% can be from outside. Now what centre is planned for 51% FDI from outside can be disastrous. Becuz you have given 51% hold to foreigners to boss over Indian people and economy. Right? Ok. Here, your opinion may be otherwise. Those grey area only to be argued)
2. On which sectors FDI is needed?
3. How long these FDI needed?
4. Why it is needed now?
5. Precautionary measures?

Without addressing in to/arguing on these 5 basic questions, any kind of 'yes' or 'no' debates on FDI via media are utterly foolish and meaningless.

This is just a sample on how any 2 groups of "learned people" sitting across the table go on beating around the bushes in the name of 'Hard talks' and 'sensational debates' only to arrive  "nowhere" ever !!

Posted by Mohan Balki - YoZenMind Counseling Psychologist, Chennai, India. at 7:11 AM No comments:

Tell me what that is upon which you most frequently and intensely travel, that to which in your hurrying hours, how badly you feel your pain...on the Indian deserted Roads! Be it roads or streets why that our Chennai/South India (road) ways are rough and rude? If you are traveling for more than 10 km per day, then you need not go to any hell for any reasons confined. Yet, they put and put "thar"roads, breaking every hills and mountains to pave ways...months and years by contracts. Patches! My goodness! It is indeed a cemeteries laid upon streets and roads to high jump your body and vehicles. Our Tamil Nadu Ministers should go around Bangalore/Hyderabad or any world cities or atleast to keenly watch the third-rated small countries and their road maintenance at once!

Blame not the Tails but Heads!

There is an infinite argument about people that they only have to turn good to reform any nation. It seems funny as to the tails only shall direct the heads! It is quite common to see any prosperous family with its wise and virtuous Head. And do we not know that any good organization is valued by its top CEOs and never by its employees? But when it comes to social reforms and national development, Leaders are never ready to take up their responsibilities. They simply wash out their hands and blame ignorant people and their tails! If one Gandhiji and his virtues could create an Independent India, why not a 'prosperous India' with our thousands of present leaders?

Indian Railway authorities leaving tender and deploy contractors to take care of the two wheelers in the Rly. parking area. But 90% of the Rly. parking areas have no shelter and no firm grounds to put even the center-stand or side-stand either. All parking areas seem like junkyard with full of dust and pollutions flying everywhere. Just go and watch yourself the Chennai Central Railway Station Two wheeler parking area and know the truth. Thousands of brand new two wheelers...decaying like rotten apples everyday! Is Railway opt to serve for millions and billions of Rly passengers of India or for the mere welfare of few petty-minded parking contractors?

Posted by Mohan Balki - YoZenMind Counseling Psychologist, Chennai, India. at 8:51 AM No comments:

1. This Blog is to address various social issues in a short form.
2. Title itself should convey the entire theme.
3. The maximum lines of the content shall not exceed 7 -10.
4. It should be a combination of 3 ingredients which are Issue, Consequence and What can be done?

Posted by Mohan Balki - YoZenMind Counseling Psychologist, Chennai, India. at 8:26 AM No comments:

Mohan Balki - YoZenMind Counseling Psychologist, Chennai, India.
I am primarily a social and analytical thinker. Besides I work as a Counseling psychologist & therapeutic sculptor since 1992. I devised my own Yozen techniques and methods to go to the core & solve 1001 different kinds of challenging psy-issues within few days!! Watch my media interviews. Mail: yozenbalki@gmail.com Mobile: +919840042904 My site: www.yozenmind.com